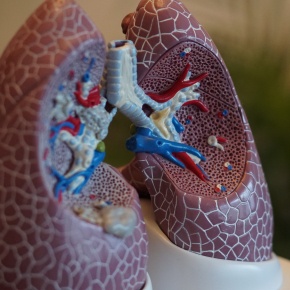 Acute Respiratory Distress Syndrome (ARDS) is a particularly severe form of acute respiratory failure. During the treatment of its cause, mechanical ventilation with positive end-expiratory pressure (PEEP) is used in an attempt to control hypoxemia. Nevertheless, repeated experimental and clinical studies have demonstrated that inadequate ventilatory settings are likely to aggravate ARDS lung injury. In order to reduce ARDS mortality, the doctors from the Intensive Care Unit of the Croix Rousse Hospital, assisted by CREATIS researchers, therefore wish to optimize mechanical ventilation by customizing the ventilator settings depending on respiratory impairment.

Historically, respiratory mechanics measures, available at the patient's bedside with modern ventilators, have been used for this purpose. But to date, they have shown their limitations since only plateau pressure (i.e., the pressure measured at end-inspiration pause – an indirect reflection of lung compliance and aerated lung volume) is used daily to adjust mechanical ventilation settings.

Conversely, thoracic CT is the reference technique for quantifying pulmonary aeration during ARDS. In addition, it can be used to assess cyclic hyperinflation, i.e., excessive lung inflation at each ventilator insufflation. This cyclic hyperinflation is determined by calculating the difference in volume of the least dense lung regions between two scanner images acquired during an inspiratory and expiratory pause respectively.

Nonetheless, analysis of cyclic hyperinflation on thoracic CT is not used in clinical practice until now, as it requires lung delineation on each tomographic slice by a radiologist, on both exhalation and inhalation scans. This segmentation takes several hours and is therefore not usable in clinical practice as an aid to ventilator adjustment.

The CREATIS team has recently developed a semi-automatic segmentation software, allowing the calculation of the lung volume subjected to cyclic hyperinflation within a few minutes. This semi-automatic segmentation can be performed by a non-expert medical operator. Researchers have so far analyzed the results of 20 ARDS patients with promising preliminary results. The next step is to integrate this tool into a ventilator adjustment strategy based on quantitative imaging analyzed in real time.

The new challenge for these researchers is the segmentation of the pulmonary parenchyma including non-aerated areas, whose tomographic density is close to that of the surrounding tissues (chest wall, mediastinum) on non-injected scans; the absence of contrast defeats algorithms based solely on scan density. Segmentation of these areas would give access to recruitability (i.e., the propensity of the pulmonary parenchyma to re-aerate in response to increased end-exhale pressure set on the ventilator). The development of algorithms based on machine learning may be an interesting avenue, integrating the constraint of result availability within a few minutes; indeed, the evolution of ARDS takes place over a maximum of one week and image-based protective ventilation strategies must be applied from the very first hours, in order to expect an effect on the prognosis.